The Loreto Sisters founded a school for girls in Fermoy in 1853. From the beginning, the school catered for junior and senior pupils and received both boarders and day pupils. 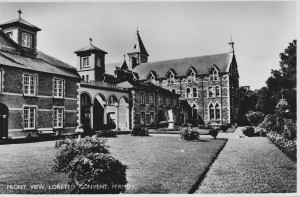 The boarding school closed in 1993 and the dormitory accommodation was converted to provide extra classrooms, a Prayer Room and specialist classrooms. The boarders’ refectory is now a Transition Year Project and Lecture Room.

In 2003, another extension was completed. This extension provides Science, Technology and Pastoral Care accommodation as well as classrooms.

In 2004 a Sports Hall and a new Basketball Court were added and in 2009 the old All Weather Pitch was upgraded to Astroturf.  There are Hockey, Basket Ball, Camogie and Gaelic Football teams throughout the school.  The Sports Hall and pitch are used by many clubs and organisations in the local community.

Music and the Arts have been important in the life of the school from its earliest days and this tradition continues.

A Board of Management was first set up in January 1989.

The school is one of eighteen Loreto Secondary Schools in Ireland. All Loreto schools share a common educational philosophy and maintain links through inter-school co-operation and conferences of personnel from each school.

Loreto Fermoy - How it came into being 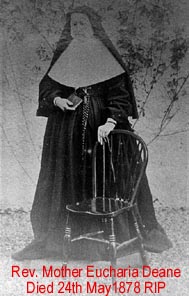 In the year of 1853, Bishop Murphy of Cloyne dioceses invited the Loreto sisters from Rathfarnham, Dublin to open a school for the education of young girls in Fermoy. Immediately the Rathfarnham superior gave her consent and on October 17, 1853 she, accompanied by Mother Eucharia Dease and two other nuns set out by train from Kingsbridge station. The train only came to Mallow so from there to Fermoy the nuns travelled by car, probably on of Bianconi’s famous long carsOn reaching the convent, the nuns found an empty house cold and unfurnished with white washed walls. One room had furniture but that was on loan. It was a wet stormy day when the Galtee mountains were covered in mist and the Blackwater was swollen and dark. Rain poured in under doors and windows. Water was even running down the walls -“Weeping for joy” as one priest remarked.

The Presentation nuns helped in every way giving mattresses etc. Having spent a week in Fermoy, the Rathfarnham Superior bade farewell to the three nuns, and on leaving gave them the sum of half a guinea as sole capital on which to proceed. She also gave them some cold meat for a week’s provision. The bishop gave them ten bedsteads, a few barrels of potatoes and a little coal.

The school opened on November 2, the Feast of All Souls, the year the river swelled to such a height, the flood caused dreadful destruction in the town. Conditions in the convent were so bad one of the nuns inspired by necessity to write to her sister in Dublin, a Miss Dease, telling her of the distressed state of the community and imploring her to send and to beg of her Aunts to send down any spare articles of furniture, table ware, carpets or other household necessities that they could dispense with.

This appeal was answered by the arrival of a quantity of useful articles but of course falling short of their requirements. One aunt had four young daughters and she decided to send them as boarders. This afforded great monetary help, as their year’s pension was paid in advance – three months before the nuns were ready to receive the girls in Fermoy. Thus before the end of January 1854, the boarding school was opened with four pupils in it and the nuns found that it was not always raining in Fermoy and when the sun shone they looked down the valley of the Blackwater, on a landscape of heart-lifting loveliness.

Miss Dease continued to give time and energy in purchasing most appropriate furniture for the school, dormitory and dining room. Thus through her great charity, the nuns who possessed nothing for their support on this mission found as if by a miracle their house made comforatable and attractive and themselves spared the humiliation of a failed mission.

Their purse and larder were both empty now but they prayed hard and before a week was out, a generous lady in Fermoy, a Mrs. O’Gorman gave them a sum of £70, plus £2 for the purchase of a statue of Our Lady for their oratory. She also gave them other gifts for Christmas eve and for their Christmas dinner.

In January Miss Dease agreed to come as a parlour boarder to Fermoy. She brought down her furniture and pitying the nuns lack of teachers, she kindly offered her talented aid, spending many hours daily in the school teaching German and Italian. She procured a French Master for the school. She also gave £100 to install gas.

In May that year big dormitories were built. They cost £300 for which sum the cost of interest was great but that debt was paid without even getting a penny from the dioceses or the Fermoy people.

In May that year the first postulant arrived, a Miss Murphy and incidently, my aunt – Sr Evangelista. My father often told me that while she was bursar, she asked him to come to a fair in Fermoy to vet a cow the nuns needed to purchase for their farm. The Winter of 1855 was particularly inclement. Cholera prevailed in Fermoy. The nuns prayed to Our Lady to preserve the pupils from the scourge.

In December a pupil took ill. The doctors feared the worse but the nuns prayed and fasted and the child recovered. She went home to her parents for five years but begged to return to school in 1862 and was happy to spend her entire life as a nun. However, she got ill again and died on July 26. Her parents requested her burial in the convent cemetery. With great love and sorrow she was laid to rest, the first ever to be buried in the little cemetery.

Miss Dease, that estimable lady, sister of the Superior, without any obligatory tie, entered the ranks as a volunteer and became an active assistant in rearing the great educational establishment from its infancy to its present vigorous maturity. For 14 years, without the obligation of religious vows, she gave her head, hand, heart and fortune to help her good sister in founding Loreto, Fermoy. Hers was one of the noblest and most generous hearts that ever throbbed but alas, her health suffered from her hard work and she died on June 4, 1867. She was also buried in the little cemetery, sadly mourned by her loving sister, her family and many friends.

Mother Eucharia Dease proved an out-standing foundress. She lived to see the Fermoy Convent a substantial pile of buildings with a fine reputation in the educational world and having trained hundreds of young ladies to walk in the way of God in the world, and in the cloister. She died on May 24, 1878. She was laid to rest beside her sister and the community sadly mourned the loss of a great mother and foundress.

We, her grateful children are privileged to carry on the task she so nobly undertook on that bleak October day in 1853, and even though the clouds are black at times, the sun still shines on our convent home and our hearts are filled with joy.